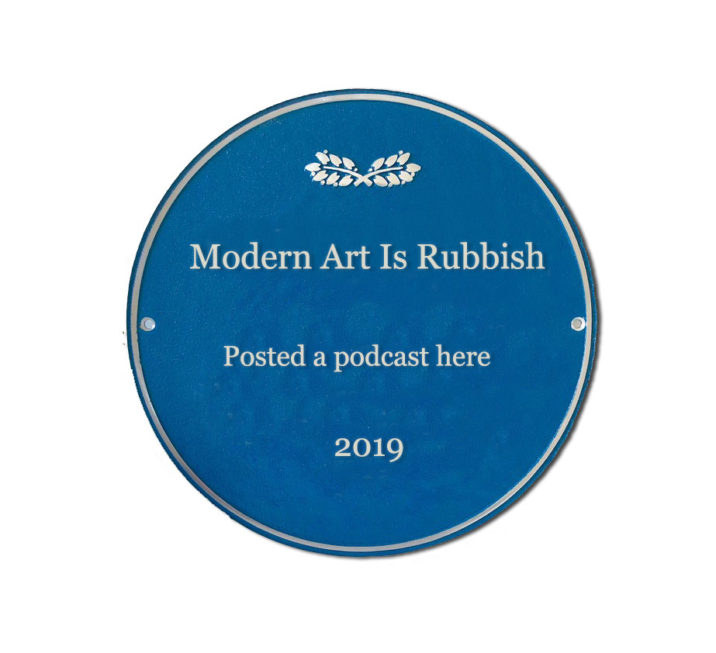 Gavin Turk is a British Artist who was born in 1967. His work deals with questions like authorship value, and what it is to be an artist.

This work is a blue plaque that has “Gavin Turk Sculptor worked here 1989-1991 Borough of Kensington.” It based on the Heritage blue plaques seen on buildings around England. Normally to commemorate people who have a lifetime of work behind them, Turk’s work playfully inserts himself into art history, when he was just starting out. The Royal College of Art was not impressed and refused to offer him his master’s degree.

Me Myself and I

This is a life-size waxwork of the artist made to look like the Punk Rock Icon Sid Vicious. He is in the same gun-slinging pose that Elvis was famously shown in a work by Warhol.  The whole work is placed in a Glass Vitrine Display case.  Both Elvis and Vicious were stars that burned brightly, but ultimately self destructed. This piece it is a comment on the nature of celebrity, Sid vicious the hard living rebellious bass player in a punk band, now is reduced to a museum curiosity. Also with artist’s once they become part of the establishment, they are no longer the outsider and are part of system they once rebelled against.

Placed in a rather grand looking wooden vitrine looking a bit like a 4 poster bed the artist has portrayed himself as Jean-Paul Marat in his bath. Marat was a revolutionary who was stabbed to death by a political assassin during the French Revolution. You can find out more by listening to our Baths Special episode here.

This is a small bronze self-portrait that looks a lot like an Oscar statue. It was meant to be awarded each year to an individual who captured the spirit of the Artist. The prize was launched in a pseudo-ceremony in 1994. The first winner was the artist Michael Craig- Martin. Turk never actually delivered the statue and it was never awarded it again.

A print of the artists last name in the style of Robert Indiana’s Love. In many of his signed works, Turk questions to the value we place on objects. Once we know a work is by a famous artists, we view it differently and it takes on a different meaning for the viewer.

This is painting in the style of  Jackson Pollock style painting, it is created by the artists constantly writing his signature.

“Box” Is a bronze sculpture painted to loot like a cardboard packing box sealed with tape. Turk is very interested in the idea of taking something particularly that might look like a discarded object and placing it back in a gallery setting.

“Nomad” is a bronze cast of figure curled up in a dirty sleeping bag, you cannot see the person’s head. It looks as though it would be occupied by a homeless sleeper. By putting this work in the gallery it forces the viewer to look at it and think about the plight of the homeless, a sight that some may ignore if seen on the street.

This was a piece which was show at the Skip gallery (a rubbish skip) a temporary gallery space  on a street in London.  In the skip was a single art work. It was a brown paper bag, painted to look like an empty bag of prawn cocktail flavoured crisps called Skips.The work is called Transubstantiation, this refers to the conversion of bread and wine into the flesh and blood of Christ. The shape of the crisps reminded Turk of communion bread.

We talked about a couple of works created by the artist Lucy Delano on the show.