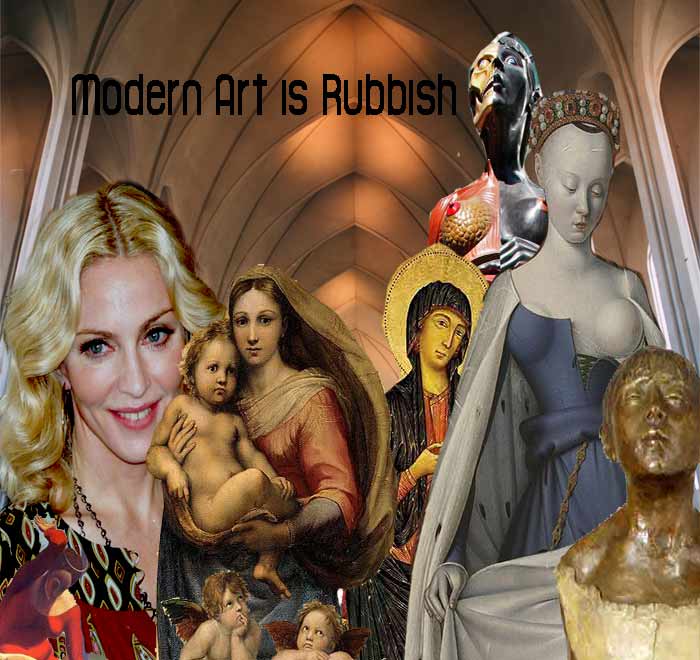 In this Episode, we look at art featuring Madonna (Mother of Jesus) and Madonna (Madge) the Pop Star!

The Virgin Mary is typically referred to as Madonna when she is depicted in images with the baby Jesus.  Madonna in Italian means “My Lady”

Why is the Madonna Blue?

The Rich Ultramarine Blue as we talked about in our previous blue episode was expensive and rare, therefore was considered quite sacred. And for a long time was only used on the Virgin Mary

The shade of blue used on the virgin was to become called Marion Blue. Jesus, by contrast, is mostly depicted in red.

Why are Medieval Madonnas are so strange looking? 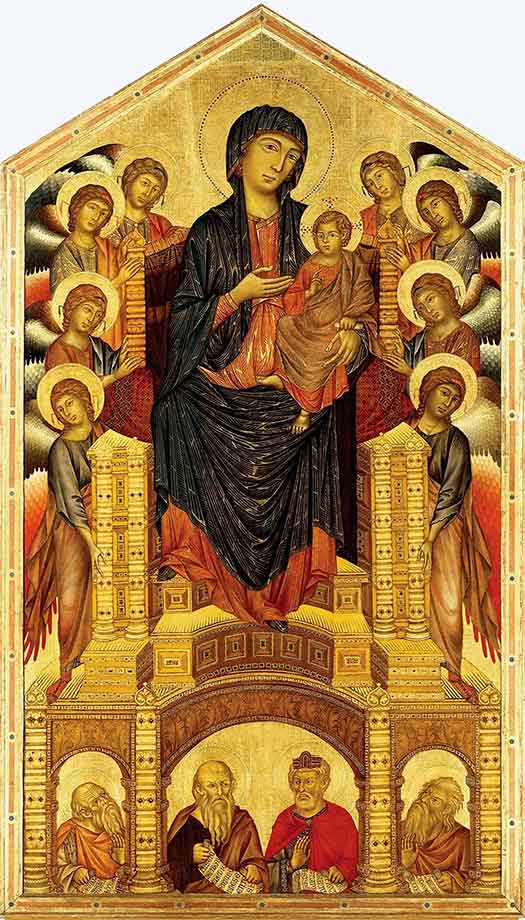 When you look at images of the Virgin Mary from the medieval period in history, Mary looks a bit odd. In this by the Italian Cimabue,  She is depicted as being very long and out of proportion,  surrounded by tiny angels, if Mary was to stand next to them, the Angels would only come up to the knee of Mary.

After the fall of Rome, Christianity and the church stepped in to fill the void. The Romans had plenty of beautiful statues the church at this time feared that this lead to people worshipping the actual physical object as opposed to worshipping the inner beauty. So Mary was painted strangely and out of proportion so that people would focus on the inner heavenly beauty.

The painting was commissioned  in 1512 by Pope Julius for the San Sisto Church in Italy, it was in honor of his late uncle Pope Sixtus

The painting is of the Virgin Mary, she standing barefoot holding Jesus. In the background, you can just make out the faces of white faded cherubs.

To her left is saint Sixtus and to her write was Saint Barbara.

The most famous part of this painting is the two cherubs, at the bottom of the picture 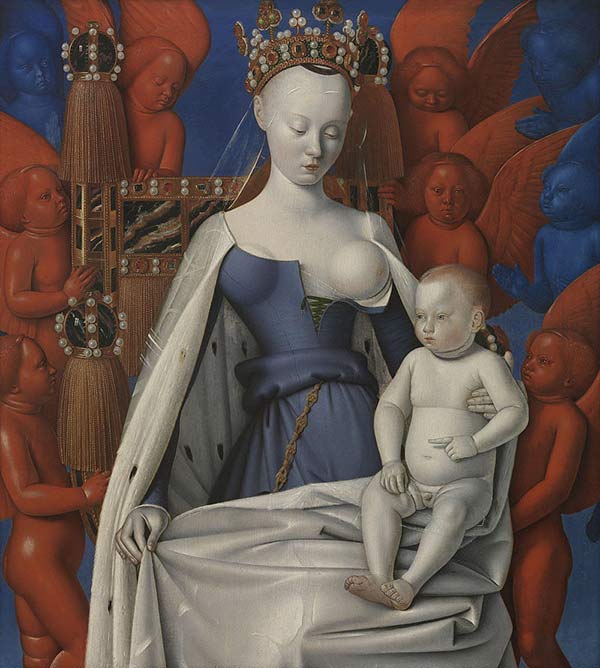 The image is part of The Melun Diptych which is a two-panel Devolution painting, The other panel is an image of Étienne Chevalier  and his patron St Stephen

The Madonna is sitting on a throne held up by angels that are completely painted in deep red or blue.

Mary wears a crown and in contrast to the angels, she is extremely pale as is the pale ginger baby Jesus. What is unusual about this picture is she exposing her extremely strange spherical breast with virtually no nipple, it seems that the baby Jesus is not in the least bit interested in this.

The image is quite interesting because it is also supposed to be a portrait of Agnes Sorel, the influential mistress of the French king Charles VII…  she was invaluable to him and died during childbirth.  Agnes Sorel was well known in court for wearing very revealing dresses sometimes exposing her breast.

At the time, many would have considered it blasphemous to cast a deceased royal mistress as the Virgin Mary.

This features a more earthly Virgin Mary, who looks be at her wits end with a  naughty Jesus who is about 6- 7 years old and is laying across her lap naked and face down. His halo has fallen off and is laying on the ground. His buttocks are red from the beating. Mary is dressed in a tight red dress top and has a blue shawl draped over her knees. On the left of the painting…  The surrealist and former dadaist Andre Breton, Paul Eluard are looking on through a small window.   The whole image is very surreal and dreamlike… This is quite a challenging image, Mary still has her halo so still has her holy status. Jesus was apparently perfect and without sin but in this without his halo, he is more earthly.

The Virgin Mother is a Bronze partially painted sculpture in the similar strong colours of a medical model. It is of a naked pregnant woman with cut-away views of her innards including skull, muscles, skull, and fetus. It is based on a child’s educational toy of the kind where you can remove the organs. This work for  is about the fragility and mystery of human existence

It is standing in the same pose as Degas “Little Dancer Aged Fourteen”1880–1 it is believed that Mary may have been around 12- 14 when she gave birth to Jesus. Little Dancer is A sculpture of a young Parisian ballet dancer. The original was made of wax and adorned with real hair and it had a fabric skirt, it was quite a revolutionary break with the normal subjects for sculpture. When Degas released this work it a caused a scandal it was described at the time by some as repulsive,” “vicious,” and “a threat to society”

There have been several images of the pop Star Madonna she has long had links with three very famous artists.

This was at a time before they were both on the brink of fame in the early 1980’s Madonna would often find him getting up in the middle of the night to start painting when the urge overtook him. He apparently would just get up and start painting whenever the urge struck.

Madonna owed a few works that she gave to him. In 1984 after they split she was made to return them, she told Howard Stern in an interview “he made me give them back to him. And then he painted over them in black.”

In 1985 Madonna was getting married to Sean Penn. Madonna invited the artist Keith Haring to her wedding as his date he took Andy Warhol.

Haring most famous for his graffiti work, he had also produced works where he cut out headlines from the New York post and rearranged them t them up to produce fake Headlines Such as “Pope Killed for Freed Hostage” “Reagans Death Cops Hunt Pope”

So as a wedding gift he and Andy Warhol produced several works for her based on a fake New post headline “Madonna On Nude Pix: So what?” At the Time Penthouse had got hold of nude artistic photographs taken of Madonna when she was younger and struggling this work was referencing this.

For this work, Mr. Brainwash made famous because of the  Banksy Documentary “Exit through the gift shop”

2 thoughts on “Madonna and Madonnas MAIR30”