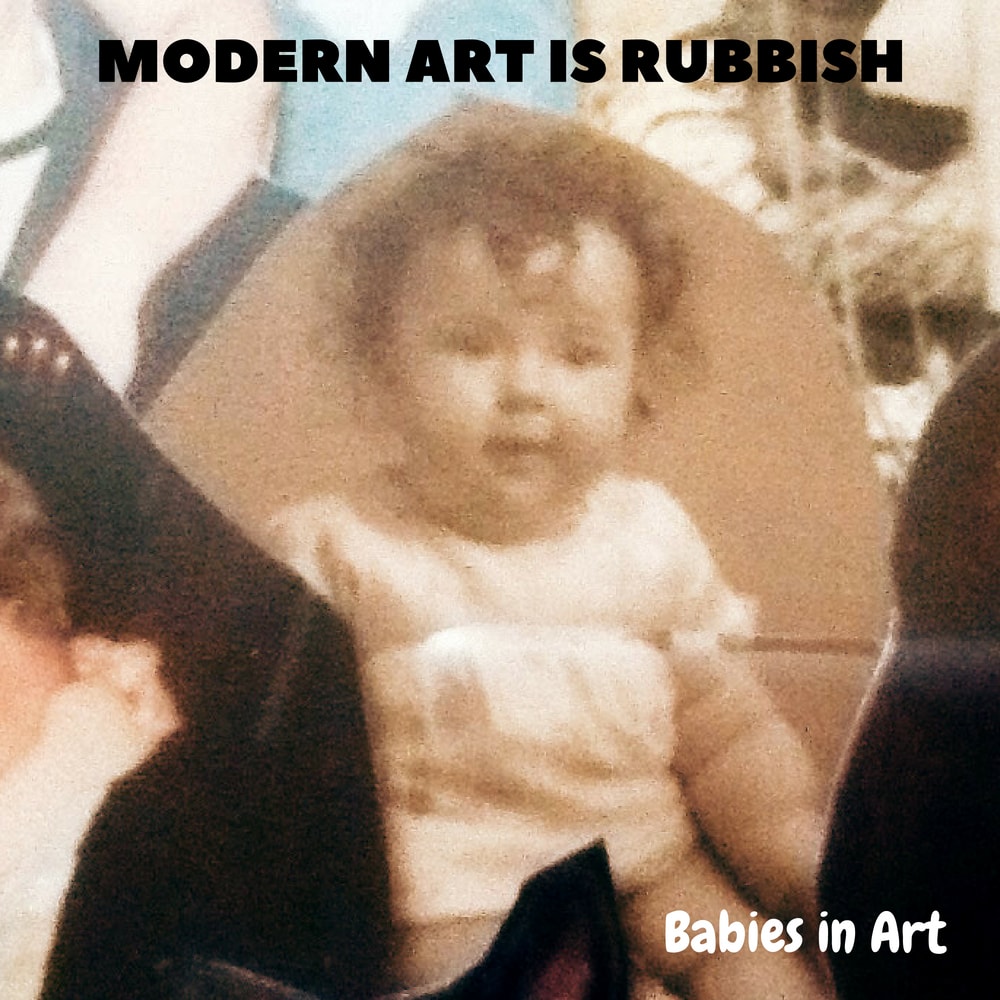 Babies in Art? This episode will feature talk of Giant Babies,  Medieval Man Babies, Military Babies, Pregnancy suits and a Baby being born as Art. All links to the images discussed are at the bottom of the episode page. Thanks for listening modernartisrubbish.com

Today realistic baby depictions are everywhere. But it was not always like this. There was a time when babies were painted as ugly baby men.

The Expulsion of the Money-Changers circa 1480 – 1500 Attributed to: Master of the Kress Epiphany, Dutch

Jesus has gone into the future and entered into a Gothic-style church. He is angry at the commerce he sees all around him.  The church is filled with concerned merchants fearful of the whip that Jesus is brandishing. Jesus with his free hand is knocking over a table of money. There is a crafty blonde man-baby is making a grab for some flying cash. A Ram looks suggestively at the viewer. There is also a banking baby that is raising his fist in anger at Jesus’s attack on his trading floor.  He looks like the lovechild of Chucky from the Childs Play movie and Chuckie from the Rugrats cartoon.

Madonna of the poppy

Painted in 1333 in Italy, Paolo Veneziano’s

An Andrew Lloyd Webber baby Jesus baby looks affectionately at the Virgin Mary whilst reaching for her poppy.

Why do the babies look so strange?

Babies were viewed as little adults in transition. Medieval Churches commissioned most paintings at the time, so most babies depictions were of Jesus. Jesus was believed to be born perfect by them, so would have been expressed as a little man. In Medieval times childhood was seen as a mere transition  to be becoming a young adult around aged 7

Quinn is a British contemporary artist who creates sculpture, installation and paintings. His work questions “What it is to be human in the world today”. His themes include the body genetics and identity.

Planet 2008 is a giant  4 metres high and 9 metres long, white coloured bronze sculpture of his son. It seems to be floating above the ground. Quinn was quoted as saying “To me, ‘Planet’ is a paradox – hugely heavy, yet the bronze appears weightless; overwhelmingly big, yet also an image of vulnerability. It is both a reflection of ourselves and the earth upon which we live.”

Ron Mueck used to be a puppet and model maker who worked with Jim Henson.

He makes Extremely realistic sculptures of people, that are executed with incredible detail (showing veins and hairs)

‘A Girl’ more than 16 feet long newborn baby, with umbilical cord and smears of blood and other birth matter. Scrunched up face.

My works depicting babies were expressing my point of view to the world through the eyes of a child—my inner child.” — Johnson Tsang in beinart.or

He served in the police force and saw a lot like the tactical unit, emergency unit, special duty squad, vice (anti-drug squad), and traffic accident investigation team and having seen the dark side of humanity

In 2005, I started teaching kids: I told my inner self to go back to the age of a child. Then I became one of them, enjoying the classes. My inner child kept visiting me from time to time, especially when I created my own art. I believe that sometimes I wasn’t the one creating my works. My works depicting babies were expressing my point of view to the world through the eyes of a child—my inner child.

French Theatre actress Work features Dreamlike, realism, questions around embodiment, imposition and escape from the human body as a functioning organism. Uses latex and resin to make lifelike ‘”Suits of skin, ready to support” that can be worn. One is a bra with a baby attached, another is a woman’s torso with a porthole revealing a baby in the womb, or creating a window for the baby to see out of. Also, punchbag in which punchbag is a globe of the world and a newborn baby is curled up on top. A lot of her commentary on her work and she talks about an escape and kind of wild release – like an animalistic howling (she’s quite poetic with her words!).

When the Earth is at stake, the only being who has the power to defend it is a newborn, strong in innocence, virgin of all but Life.

When planet Earth is in danger, it’s a newborn child, a life of everything but life.

Her early works were re-enactments of events from her life as art, and then in 2005, she decided to present events that as they actually happen in her life.  Her audiences are invited to view and be a part of this real experience.

The artist gave birth to her child as art. The event took place in the Microscope Gallery in Brooklyn New York. The gallery was set up to resemble a home-birth centre which included, a shower with curtain, a birthing pool, and two ten-foot trophies one dedicated to Baby X for being born, and the other for Kotak for giving birth. The gallery notified people on a mailing list as to when the baby was being born. 2 security guards kept the press and uninvited guests away. There was also a midwife present to assist with the birth.

Kotak re-enacted her experience with Postpartum Depression. In a 6 hour performance. Kotak lay on a bed surrounded by medical images. She used a breast pump. For the performance, she was separated from Ajax. Throughout Kotak read, and wrote in a  journal about her child making her life better.

For Ajax’s Second Birthday Party the public were invited to the party as art. For “Singin’ Rain…”, there was a rain machine and umbrellas were given out. The event also featured live jazz, instruments for others to join in, and a ball pit for toddlers.

Her current work is called raising baby x she is raising her baby as a work of art.

The Expulsion of the Money-Changers

Madonna of the Poppy

An interesting Interview with the artist in the VillageVoice.com

A little note from us

A lot of people like to subscribe via Itunes and if you could leave a Five Star review that would be fantastic.  You can join in the conversation with us on Facebook. If you have any questions or suggestions for the show  Our email is info@modernartisrubbish.com   Thanks for taking the time to check out the site.