Endure this! the art of Endurance

Artists inside a rock, chained to marble, living in a locker and more. These artists really do like to put themselves through it!

The artist was chained by his ankle to 4-ton block of marble, the chain was attached to the middle of the block. The only way for the artist to free himself of the block was by hammering away at the slab with a chisel. The block was symbolic of Art History and by chiselling away he was attempting to free himself from the Marble. After 19 days the artist gave up and had to be freed from the chain by using an angle grinder.

You can see a time-lapse of his whole performance below.

For a whole year from 11 April 1980 to the  11 April 1981, Hsieh punched a time clock every hour each time he clocked in he took a picture of himself,  he shaved his hair before he started the piece, so his hair growth showed the passage of time in the photographs…

From the late 70s to the mid-80s, Hsieh performed five One Year Performances. These included:

In this performance peice, Hsieh was tied to an artist Linda Montano for a year. They were not allowed to touch throughout the whole performance.

Image of the Rope piece

For one year, Hsieh he did not make any art, he did not talk about art, did not look at anything related to art.

A very interesting interview with Tehching Below.

Pierre in Paris is a performance piece by the French artist Abraham Poincheval who was born in 1972.
For the performance, Poincheval lived shut inside a boulder for a week. The rock had a seated shape of the artist carved into it for the artist to climb into. You can see this in this picture of him

Visitors to the gallery were confronted with a huge roughly cut 12-ton limestone rock that had been sliced down the middle and it halves were put back together. On a gallery wall was a video screen showing the artist inside.

It was a piece about time, he wanted to experience the ageing stone.

Here is a video of the artist’s piece

For one other piece, he stayed inside a bear sculpture for 13 days

Here is a short video on the piece

For more than six weeks on the south bank of the River Thames in London, David Blaine was locked inside a 3x7x7-foot transparent Plexiglass box, that was suspended 30 feet in the air., He had no food and had 4.5 litres of water a day to drink.

“I think when you have nothing when your living with nothing there’s no distraction your just there as you are.” Almost struggling
“I think that is the purest state we can be in.” 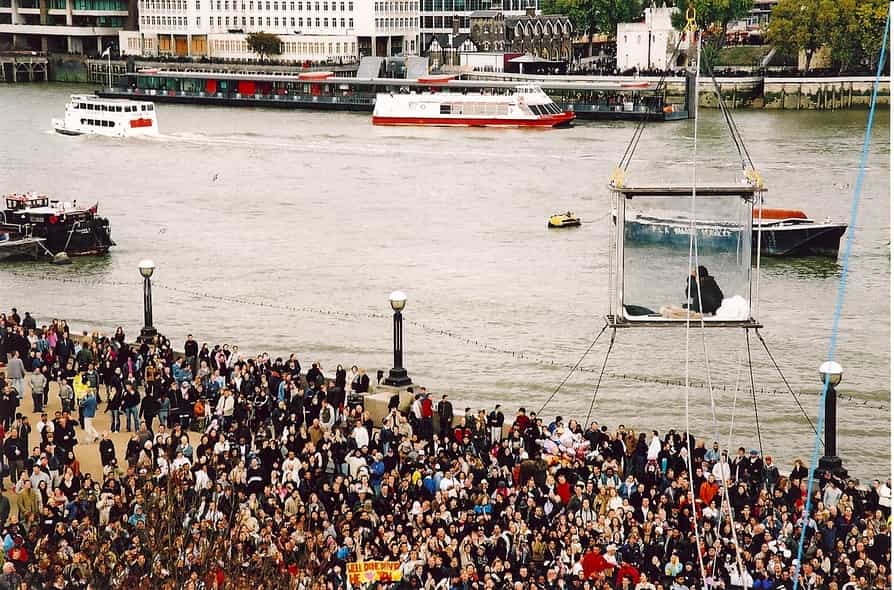 Blaine was buried in an underground plastic box underneath a 3-ton water-filled tank for seven days. 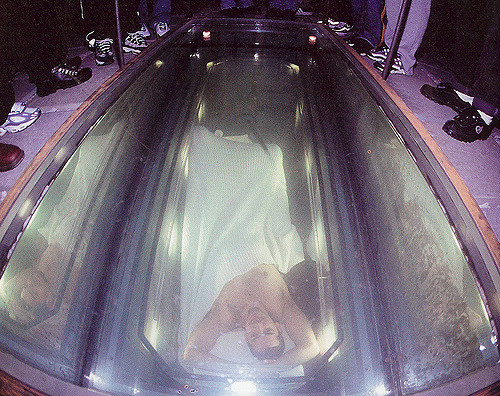 You can find more info about David Blaine on his website

A photo of a person inside a locker of the size Burden lived in for 5 days.

Here is a video reconstruction of the work.